Have a Question? Ask Now!

The 81st Annual Maskat Shrine Oil Bowl Charity Football Game was held at Memorial Stadium on Saturday July 16 2018.  The Oil Bowl game started in 1938 and is one of the most prestigous post-season all star games in the United States.

Since its beginning, all proceeds from the game are donated to charities for children suffering from orthopedic or burn injuries.  In 2012, the Shriners’ Hospital for Children became the official charity of the Oil Bowl Games.  The motto of the famous charity game has always been, “Strong legs run so weak legs may walk”.

All the fun and hardwork begins for the athletic trainers on the Tuesday before the big game.  This year OSTC had two staff athletic trainers and one student intern serve on the Oil Bowl Sports Medicine Staff.  Steve Bailey, Thomas Patrey and Bryson Young, a senior student at Sam Houston State University, worked with the players on both the East and West teams.  This year was Steve Bailey’s 50th year to work the Oil Bowl.

Over the past 50 years, Steve has had the opporunity to work with many high school football players at the annual game, some of whom have gone on to play in the NFL.  Steve even recalls a time when the players would have to practice for two weeks prior to the big game, now the athletes only practice for three days prior to the game.

Steve Bailey is already making plans to attend next years game!!  OSTC is proud to have such a great athletic trainer as part of our staff.

OSTC Wellness Offers Many Options for Our Busy Members

All access memberships are available for $35/month, we also offer a $10 discount ($25/month) to the employees of many local businesses in the Wichita Falls area.  Call OSTC to find out if your business is part of our Corporate Wellness Discount.  If OSTC has not yet partnered with your business, our Wellness Director would love to speak with management to set up a great deal for your business’s employees.

The Certified Strength and Conditioning Specialists at OSTC offer many options for clients who have full-time jobs.  Personal training sessions can be scheduled early in the morning before the sunrises. We also offer early and late fitness camps for those enjoy working out in a group atmosphere.

OSTC staff is filled with mixed emotions as we say goodbye to two long-term employees. Elizabeth Wamble will be leaving OSTC to pursue her career 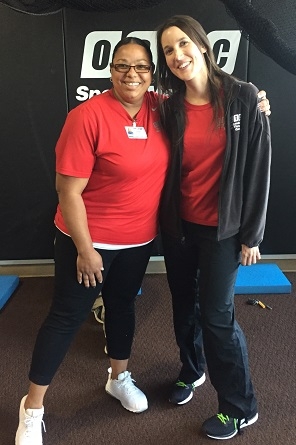 as a PTA at Seymour Hospital, and Sonny Stevenson will be moving to a new location per her husband’s military assignment.

We are all so proud and happy for Elizabeth Wamble, who recently graduated from Weatherford College’s PTA program. Liz is originally from Byers, TX and has worked at OSTC for 7 years. Liz might be quiet and reserved, but her presence at OSTC will be deeply missed. We all wish her the best of luck as she moves forward to pursue her dreams and goals. 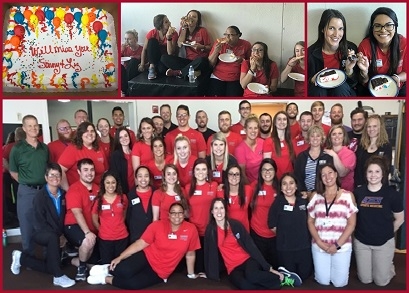 Sonny has been “the momma” of the physical therapy techs since she came to OSTC 4 years ago. She is an integral part of making this company run smoothly. At home, Sonny is a mom to 3 beautiful children; Ian, Shilo and Ethan, and wife to Master Sergeant Avionic Specialist, Fred Stevenson. All the staff at OSTC would like to wish Sonny and her family all the best as they move to their new assignment.

On May 24, all staff members of OSTC joined together for pizza and cake to celebrate the accomplishments of these two women and to wish them good luck as they move forward in their lives. Over the years, we have shared many laughs, smiles and tears with our work family. We will all miss Sonny and Liz!

Brad stated that the conference really focused on 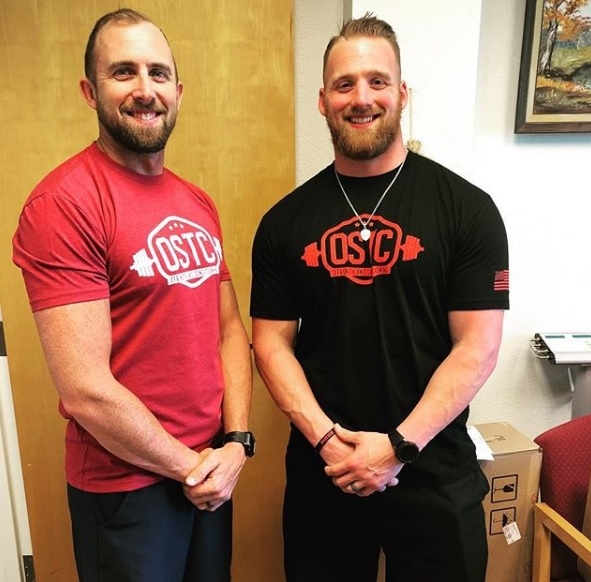 “Conscious Coaching Technique” and creating positive interactions with student athletes. As the director and head CSCS for OSTC’s Athletes Advantage Program, Brad understands the importance of developing positive relationships with young athletes to get them to perform better and build confidence within themselves. He is excited to bring a new twist to his coaching technique this summer. Athletes Advantage starts June 11th. Call OSTC to sign up today.

IYCA not only focused on the mental and emotional aspect of coaching, but topics such as new group training techniques, specific exercises to reduce patella tendinitis and drills to help increase speed, footwork and increase play time in youth sports were presented.

No doubt both Shadow and Brad will be adding new exercises and techniques to their group classes and personal training programs. 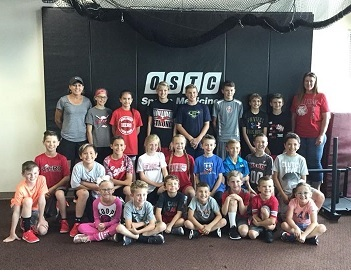 OSTC is proud to be a part of Holliday Elementary’s long standing tradition of Wellness Wednesday.  Every year students at Holliday Elementary participate in Wellness Wednesday, a day where all P.E. students run as many laps as possible.  Coach Diana DeArmond “Coach D” encourages students to reach lap “goals” and when they do they receive a new charm for each goal met.  The top male and female runners from each grade level receive an extra incentive.  These elite runners get to take a field trip day to Academy Sports and Outdoors, where each student is allowed to pick out a brand new pair of running shoes.  OSTC donates funds to help make this possible for Holliday Elementary P.E. students. 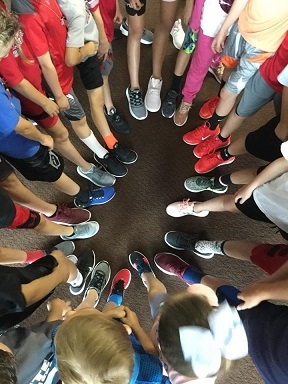 Following their shopping trip, the students come to OSTC to celebrated their success and show off their new shoes!  OSTC’s employees congratulate each student and the Wellness director spends some time teaching the kids about health and wellness and even takes them through a few running drills.

Wellness and living a healthy lifestyle is an important concept at OSTC.  We hope by encouraging these children to begin exercising at a young age we will be creating a lifelong love for fitness.

District track is this week!

District track is this week! A time when all the running and training done at track practice is finally paying off.

Athletes in District 8-3A will meet the first Monday and Thursday in April to decide who will go on to the Area Meet. District 6-4A Track meet will be April 4 and 5 in Graham.

OSTC would like to wish good luck to all schools participating in the District Track Meets and can’t wait to see the athletes at Area!

Be sure to come visit us at the OSTC Sports Medicine Trailer and get your District Track Shirt! As part of OSTC’s commitment to excellence, the professional staff is constantly seeking out and learning new techniques to help our patients.  This 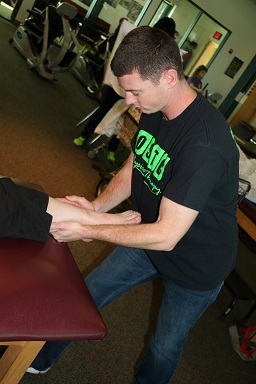 March, Thomas Patrey flew to San Francisco to attend a continuing education course to learn about the “Mulligan Concept.”

The Mulligan concept was developed by New Zealand Physical Therapist, Brian Mulligan F.N.Z.S.P. (Hon), Dip M.T.  This simple technique involves applying a sustained joint glide while the patient performs a pain-free movement. The goal of a Mulligan Technique is P.I.L.L., (pain-free, immediate and long lasting). One of the main ideas of the Mulligan Concept is “Mobilization with Movement” or “MWM.  This involves re-positioning of a body part to a pain free zone to help it move.  MWM generally involves the extremities of the body and is indicated for use when a body part is restricted or has painful movement.  Benefits of the Mulligan Concept involve decreased pain and increased range of motion.

When asked what he liked best about the Mulligan Concept, Thomas replied, “The greatest thing about it is that this technique can decrease your pain to help you complete your physical therapy exercises, and get patients back to normal daily activities.” Blood flow restriction (BFR) training is a training strategy that involves the use of cuffs or wraps placed around a limb during exercise.  The pressure is increased enough to restrict venous return, while allowing for arterial blood flow.  The person is then asked to perform high rep exercises with a very low weight.

Blood flow restriction may sound scary, but the risks are no more than general weight lifting. Study after study proves that this training technique is useful in helping athletes and patients gain strength, power, muscle size and reduce muscle atrophy following surgery. At OSTC, therapist often use BFR to help athletes maintain muscular strength after ACL or Meniscal Knee surgery.  This allows athletes return to their sport sooner!

OSTC Wellness Opens at 6:00am

Did you know that OSTC is now opening the doors for Wellness Members at 6am?  The new hours are effective Monday -Friday, to help accommodate those wellness members who like to workout before their workday gets started.  Wellness members have access to all gym and cardio equipment, as well as our indoor heated pool.  Come see us bright and early at OSTC!

What is LASER therapy?

Laser therapy is technically called photobiomodulation therapy.  This is the use of light waves to improve tissue repair, reduce pain and inflammation wherever the beam is applied. The light penetrates the body to stimulate repair to the damaged underlying tissue.  Laser therapy can be used on a multitude of different musculoskeletal injuries or issues.   Therapeutic laser can impact the tissue by improving circulation in the tissue and impacting several anti-inflammatory mediators in a joint; helping to reduce pain.

OSTC has been using the Class IV laser for almost 4 years now.  In fact, the therapists at OSTC have seen such amazing benefits and positive results for their patients, that in 2016 OSTC bought a second laser.  Laser therapy may be used in conjunction with your physical therapy at OSTC or can be purchased individually.

Conditions that are often treated with laser and see the best benefits are:  Tendinitis, Plantar Fascitis, Arthritis Pain, and post surgery pain, though it is used for several other conditions as well.